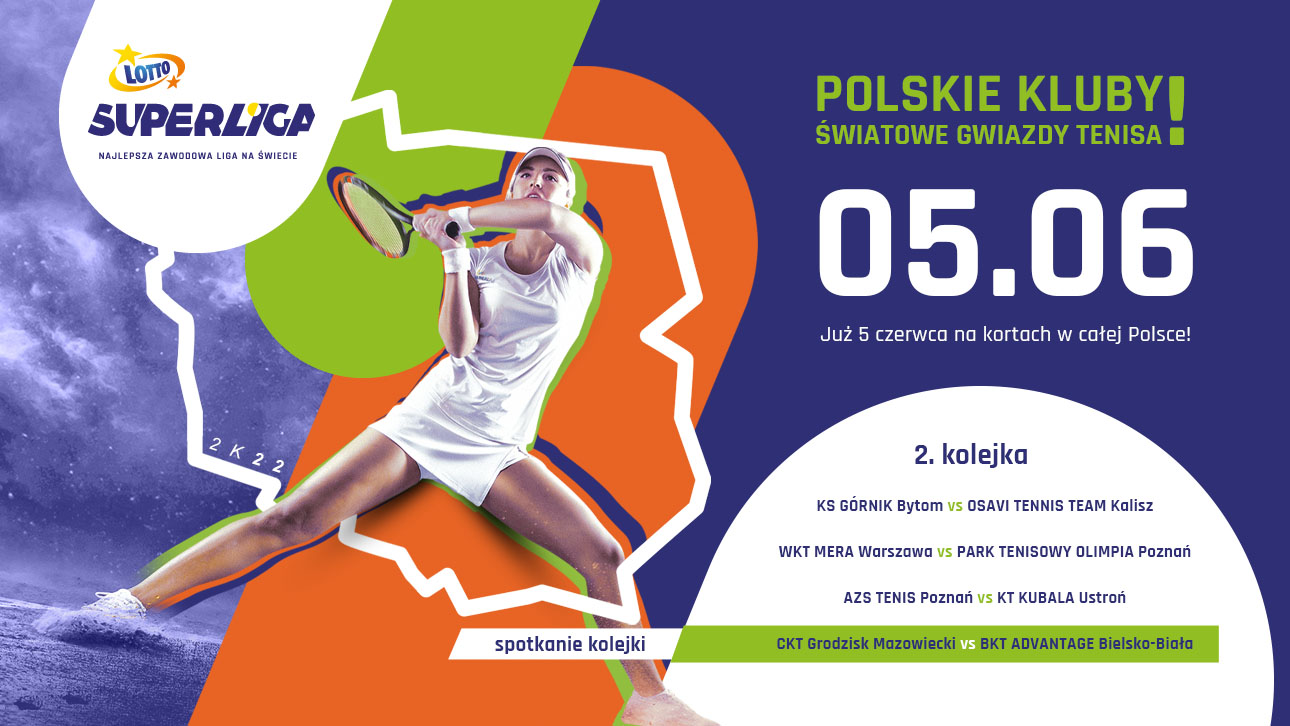 What, where, when in the LOTTO SuperLIDE - 2nd round

Dear! We are pleased to invite you to the second round of LOTTO SuperLIGA games. After the great emotions that accompanied the club rivalry on May 29, the premiere in the history of Polish tennis, the time has soon come for an equally interesting and promising meeting in Bytom, Warsaw, Poznań and Grodzisk Mazowiecki. Let's take a look at the pairs setup on June 5:

All matches will start at 10:00 am, just earlier at 9:30 am, the teams will be presented at all league tennis courts in Poland. All information about the clubs, including the addresses of the host facilities in the second round, can be found by fans on the website - CLUBS

The competition in Grodzisk Mazowiecki will be a hit, where the clubs considered by the observers to be the favorites of the tournament will clash. It is undoubtedly a game that can be called the game of the season. There can be only one winner. In the queue match - because this is the status of this game - emotions will certainly be unusual. Who will be the king of tennis Sunday in Masovia? We'll find out on Sunday afternoon.

a queue match in Grodzisk . In the next dozen or so hours we will meet the opponent Jerzy Janowicz from CKT. Who will face the great Polish tennis player? What will be the fate of this rivalry? All those who do not decide to participate in person and travel to the complex in Kozerki are invited to the screens of Polsat Sport , which will broadcast the match of the queue at 12:30 .

Watch broadcasts on the streaming channel

We also invite you to the coverage of our live studio, which will be broadcast throughout the duration of the meeting in Grodzisk Mazowiecki - experts, players, VIPs and a lot of surprises. Great emotions guaranteed!

To read the complete results and the table after the first round, please visit the RESULTS

After analyzing it, you can easily come to the conclusion that we can expect emotions in each of the Sunday duels, because ... there is a lot to prove during the TENNIS SUNDAY.

The meeting of the queue will, of course, be accompanied by another in the series of FRUTUŚ KidsCUP TOUR . This time, young doubles will compete at the facilities of CKT Grodzisk Mazowiecki. The first tournament was held in a fantastic and dynamic atmosphere, and we expect similar emotions now. More information - KIDSCUP.ORG

INFORMATION FOR THE MEDIA

We would like to remind you that you can accredit LOTTO SuperLIGI matches only through the ACCREDITO system in the tab of our games. The accreditation process has already started and will end on Sunday at 8:00 am. Accreditations will be available at designated points in the host clubs. At the same time, we would like to inform you that 30 minutes after the end of the queue meeting, a press conference with the participation of the captains and selected players of both teams.