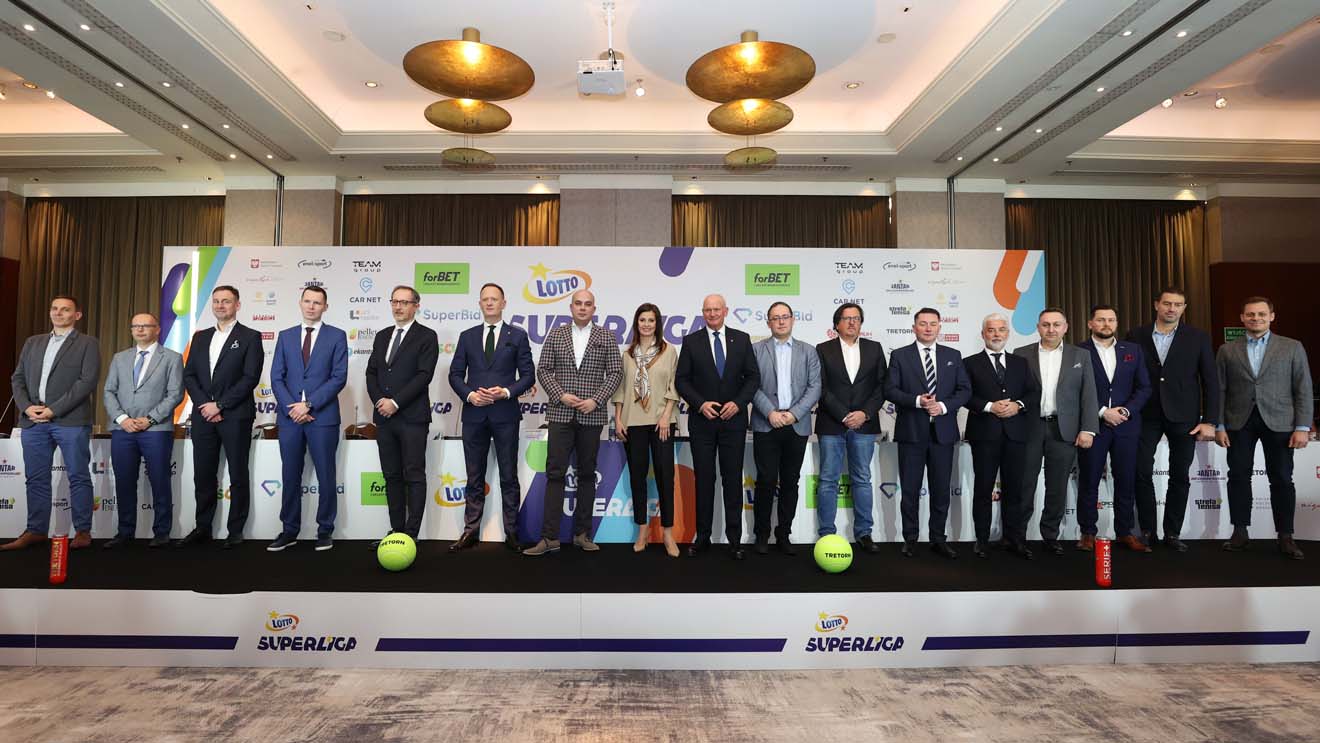 This is a breakthrough day for Polish sport. During the conference at the Regent hotel in Warsaw, Lotto SuperLIGA and Frutuś KidsCUP - professional games that may soon change the balance of power in world tennis.

The idea of ​​professional league games in tennis is a novelty in Poland. Preparations for the start of the project had been going on for several years, and on Monday, February 14, the time has come to officially announce the start of this unique project, not only on a national scale.

- This is the most important project in the history of Polish tennis - said Mirosław Skrzypczyński , president of the Polish Tennis Association. - The task is extremely difficult, but I believe that we will be the best. Polish tennis has changed a lot in recent years, and now we have an extremely exciting game ahead of us. We know that the clubs that will create the Lotto Superleague engage excellent players. World tennis will come to Poland and we will be able to participate in an extraordinary event.

Then the president of the board of Lotto Superliga, Danuta Dmowska-Andrzejuk . She emphasized the role of the project sponsors and thanked them for their involvement. - I am convinced that it will be a sports project of 2022. A great sports adventure awaits us. Our goal is to develop tennis at the highest level and it will be possible thanks to the fact that the biggest world stars will appear on Polish courts as part of the Lotto Super League. And the competing clubs will play for great prizes - the winner for the championship will receive 700,000 PLN.

The vice-president of the board of Lotto Superliga, Artur Bochenek , presented the game schedule. After the draw takes place on March 10, the first round of the regular round will take place on May 29, which will last until August 14. The final round will take place between December 8-10, and will end with the Great Lotto Super League Gala. - It is a great undertaking, but we will help the clubs in all its aspects. We will provide equipment, refereeing, and we will also prepare the facilities and media support for matches. This, combined with high cash prizes, makes the package of benefits from participation in the Lotto Super League huge.

- It looks really impressive! - said Paweł Wójcik , program director of Polsat Sport, on whose air the games will be broadcast. - We are all waiting for this event, and as Polsat Sport, which has been strongly associated with tennis since its inception, we are very pleased that we are taking part in this project.

- The emotions are exceptional - said Olgierd Cieślik , president of the board of Totalizator Sportowy, owner of the Lotto brand, which is the titular sponsor of the tournament. - Everything turned out so well that we are creating the largest tennis league in the world. We want to develop the Lotto brand in universal sport, we want to help build new champions, but also influence the condition and health of the society.

Paweł Majewski , marketing director of Zakłady Bukmacherskie forBET, which is the title sponsor of the Lotto Super League games, also took the - We have been supporting tennis for years, so we could not miss this project, it is a natural choice for us. We know who is behind this project and we know it will be a real bomb!

The establishment of the Frutuś KidsCUP, a professionally prepared competition for young tennis players, is just as important as the creation of Lotto SuperLIGA. - We want to encourage young people to follow the path of great tennis. We believe that thanks to this project, in a few years' time, young people will be able to successfully compete in senior competitions - commented the establishment of Frutuś KidsCUP, the president of the Polish Tennis Association, Mirosław Skrzypczyński. - To raise a master, you have to watch the masters - added Danuta Dmowska-Andrzejuk. - Tournaments of young tennis players will be held where Lotto SuperLIGI matches. We want young people to feel the atmosphere of great tennis, but we also want this tennis to become available to everyone - said the President of the Management Board of Lotto SuperLIGI.

- It is important for us to support and help parents in introducing children to the world of tennis - said Artur Bochenek, vice president of the board. - One of the Frutuś KidsCUP awards is a special training program that will cover four children for four years - two girls and two boys, and which program will help to properly guide their tennis development. All this so that in a few years the largest group of Polish players would be able to grow in professional tennis at the highest level.

Lotto SuperLIGA is certainly one of the largest ventures in the history of Polish sport. Professional tennis tournaments, in which the best Polish clubs represented by Polish and world leaders will take part, can only take place thanks to the considerable support of many sponsors and patrons. The project is created with us: