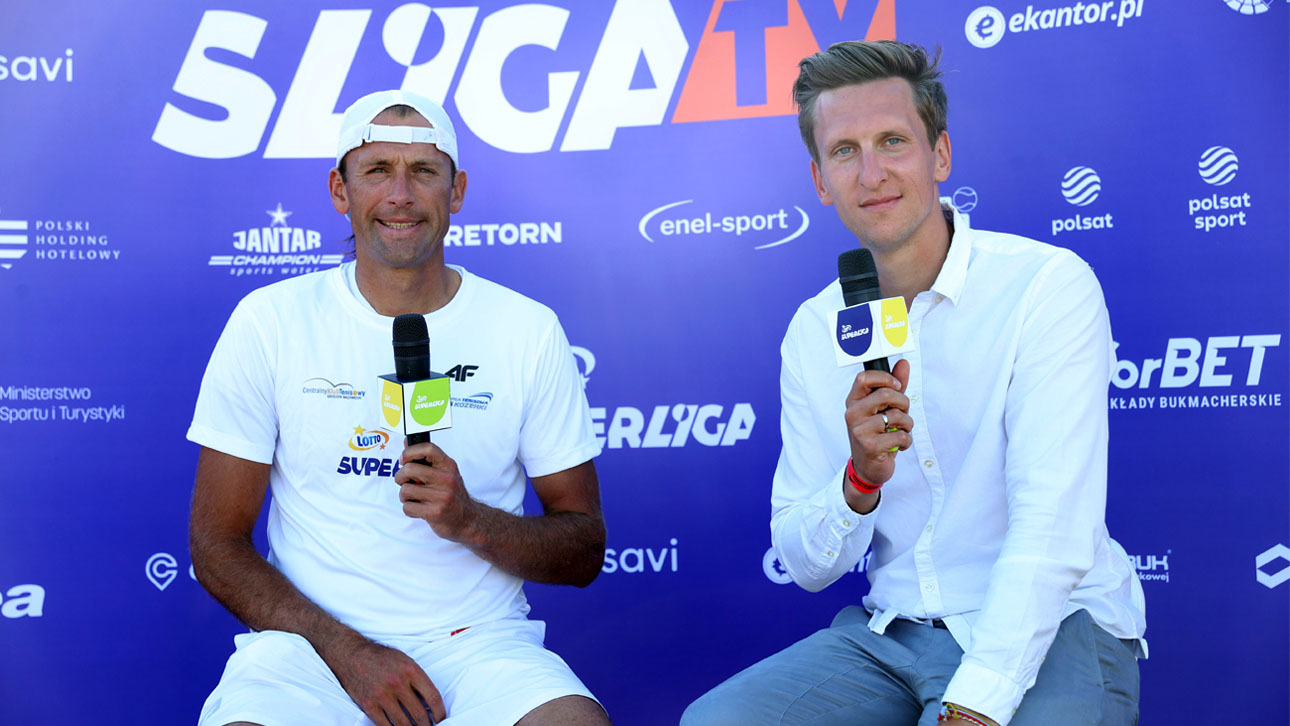 Łukasz Kubot in SLIGA.TV about the competition, the club and the future

The most important thing is for the team to win.

LOTTO SuperLIGA is not only about sports games. It is also an advanced media project in which we try to reach as many tennis fans as possible using various communication techniques. One of the carriers of our content is Studio Live, which accompanies each queue of games, and which is broadcast on the SLIGA.TV platform, where all matches are also available for streaming.

Idea Studio Live is an excellent, substantively top host - so far our studio has been Maciej Łuczak (Meczyki.pl) and Marek Furjan (Canal + and Eurosport) - who during the Queue Meetings discusses everything that happens on the courts with players and coaches , club activists, as well as celebrities who will honor the LOTTO SuperLIGI game with their presence. The broadcast goes live all the time, but of course we document it so that we can also convey the best things to those who did not have the opportunity to see them during the broadcast.

This is the case with the excellent conversation between editor Marek Furjan and Łukasz Kubot , the Grand Slam champion in doubles, who represents the colors of CKT Grodzisk Mazowiecki in the LOTTO SuperLIDE. In the second round of the tournament, CKT met BKT ADVANTAGE Bielsko-Biała. Hailed as the "Clash of the Titans", the duel was won by the club from Grodzisk 5-1, and one of the unusual sports events of the day was undoubtedly the doubles match, in which CKT was represented by Jerzy Janowicz and Łukasz Kubot.

- Welcome to the live studio after the competition of two leading LOTTO SuperLIGI clubs. There is a man with me who, at the side of Jerzy Janowicz, closed it all, the tennis player of CKT Grodzisk Mazowiecki, Łukasz Kubot. Good morning, Łukasz.

- It's very nice to see you in our local community, at the league level. And the first question is about the league. You are an experienced man, a man who has already played in many leagues. Were you surprised by the information about the LOTTO SuperLIGI project?

- No, she didn't surprise me. I believe that this is a great project. I am glad that it is happening right now, when we have Iga, the world's first player, Hubert in the top ten, that this sports discipline will be available in Poland in this way. We have seven queues, so there are matches practically every Sunday, I think that for the fans it is a chance to see players from Poland, but also - like today - also players from the Czech Republic and Slovakia. I find it an interesting project. I hope it will develop in the coming years and we will have great stars on Polish courts.

- I think that such a team game is attractive for you, tennis players, because you can rarely meet in such a team. Apart from the national team, there are practically no such opportunities, but it is also attractive for fans, because in these first LOTTO SuperLIGA matches we have a return of stars: today Agnieszka Radwańska played at MERY courts with her sister Ula. So you can see well-known people, long unseen, and on the other hand - with these experienced people, more stars can grow. Even your team is built according to a similar model: you have experienced players, but also those who want to replace you or follow your paths.

- Yes, we can even see that a lot of children appear on the courts here; that these years are now staring at Iga or Hubert - it is from them that in a few or a dozen years a talent may grow, which we will support, cheer for, which will bring us a lot of positive emotions. We are fresh after Iga's victory in Roland Garros, which is sure to make Polish tennis faster. Today, in Grodzisk, children have their tournament played in parallel with the league. I am glad that there are more and more of them. I believe that the LOTTO SuperLIGI project will become a home and will promote this sport. We will be able to see big names on Polish courts.

- You were talking about Iga and Hubert, but I can see here from the morning that these children are also staring at Jerzy Janowicz and Łukasz Kubot. Did you feel it too? After you won the game, there were a lot of autographs, a lot of photos, conversations with people who came here to see you in action, maybe for the first time.

- Yes, that's good. Especially that it was the first CKT match we played at our own facility. We had great weather, the turnout is good, we were pleasantly surprised with Jurek that so many children came to us after the game. It is a great time for families - the competition is played on Sundays, when there is free time from work, parents can come with their children, it all takes the form of a picnic. This pleasant time lasts from morning to evening, and the match of the queue is broadcast on TV. All this is only a plus and makes me happy. We believe that this turnout will grow from game to game, and we will have more and more young tennis fans to catch the bug.

- Was it your debut on court with Jurek? We remember you at Wimbledon on both sides of the net, these famous pictures without shirts come to mind when you decided to trade them, but I don't remember playing in doubles.

- In the same year that we played against each other, we played together in the US Open tournament. After this tournament, Jurek was injured, he did not play for a long time, he paused. We have known each other for a long time, we have a common history, I pass Jurek my experience in doubles. Today Jurek showed that he is still on the wave, he played his singles match brilliantly, we took advantage of this moment by entering doubles, where everything went according to our plan from the beginning to the end.

- Łukasz, I have to ask - with such a characterological combination, who is the commander in this team? You both have strong characters, you have your experience; You are a doubles player, a Grand Slam champion, while Jurek and his self-confidence - how to arrange it, what does the balance look like?

- We are professionals, we had a conversation before the match, during the match we had our tasks. We know how powerful the service Jurek has, we tried to take advantage of it - I tried to help him with this service on the net. But I didn't have much work today because Jurek served fantastic. And my return, which we also used somewhere. With time, everything went our way. The most important thing in league competitions is that the team wins. It happened and we are happy about it.

- One last question about your professional career: not at league level, but at the level of ATP and Grand Slam events. Where are you in your career?

- It is known that I am not the youngest tennis player anymore. I wanted to try my hand after the surgery, I wanted to get into the game as soon as possible, although the first two or three months brought a lot of failures. However, I had the opportunity to train with the guys at the highest level and I saw that it was moving forward. I had an appointment with Eduard Roger-Vasselin for clay courts, we played a few tournaments, but came to the conclusion that we were breaking up. He has already found a game partner, I haven't found one yet. I'd like to find someone for the hall, probably Majorca and Wimbledon. We'll see. Today I'm in a situation where I have to use my frozen rank to play tournaments. The situation that will happen at Wimbledon, where there will be no ATP points, complicates my situation. I want to find a partner after Wimbledon, for the US hard court tournaments, to play at least three or four tournaments with him. That is the plan for today. The most important thing for me is that I should be healthy and still have this willingness to play and train. The feeling that I can still play.

- Łukasz, I am convinced that your many years of professionalism and your skills speak for themselves and in this competition at the highest level you are still valued so much that this partner will be found soon. Thank you for the conversation.